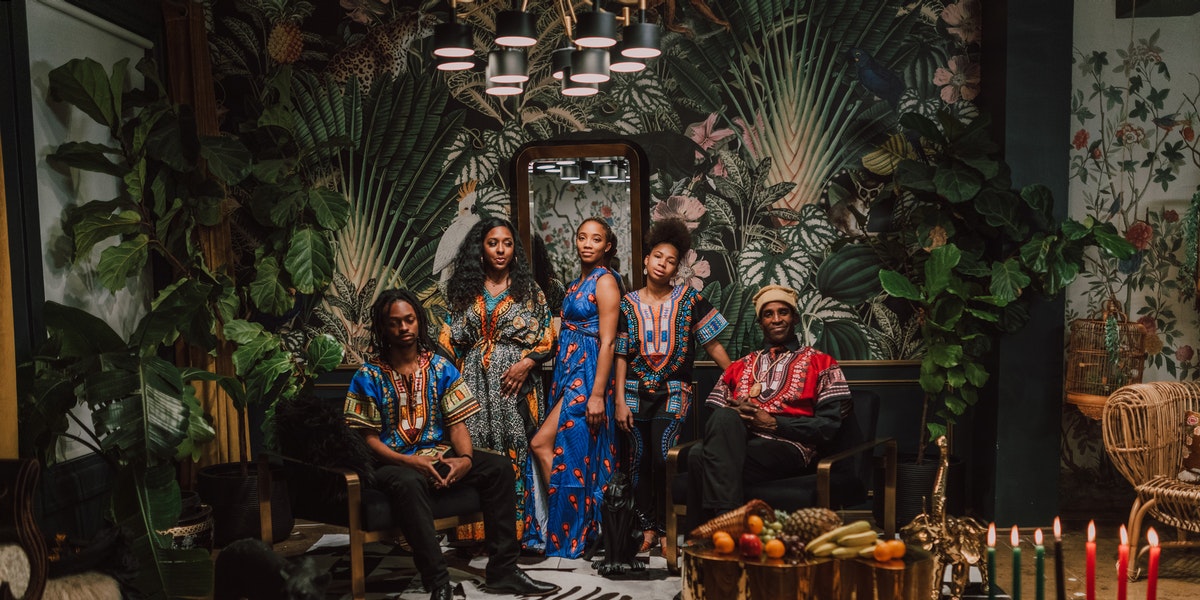 Have you ever heard the phrase “the way you dress is the way you will be addressed?” It simply means people will regard you because of the way you dress. In Africa, our dressings communicate age, gender, occupation, ethnicity, power, and religious commitment for every day, celebratory, ceremonial, and ritual occasions. This article explores the beautiful traditional clothing across Africa.

Dress involves totally or partially covering the body by supplementing it with apparel and accessories such as head wraps and jewellery and modifying the body itself with tattoos or piercing.

On this side of the globe, clothing was not designed for warmth or protection because of the consistently warm weather. Many people, especially men, did not wear any clothing at all and instead decorated their bodies with paint or scars. When Africans did wear clothing, historical evidence suggests that animal skins and bark cloth were the first used. Later many African cultures developed weaving techniques and weaving devices such as looms to produce beautiful fabric. The common materials used were raffia, fibre from palm plants, and cotton.

Kente is a traditional unisex clothing from the Ashanti and Ewe people of Ghana. It is made out of cloth strips of silk and/or cotton, designed to fit the cloth’s patterns. It is worn in a toga-like fashion. However, today, Kente print has become widely popular in Asia and the West because of the popularity of Kente patterns.

Shuka cloth is the traditional African clothing of the Massai people of Tanzania and Kenya. It’s popularly called the ‘African Blanket’. It is often red with black stripes. Workers wear a different variant of this traditional clothing to their places of work, and it is also gaining acceptance all over the globe.

Dashikis originated from the Ewe people of Ghana. They are colorful garments that cover the upper part of the body. It’s a loose-fitting shirt, long or full-sleeved with an embroidered V-shaped collar and comes in many colors and forms. It is common in Ghana and a few West African nations; Africans and blacks in the West now wear them.

Isidwaba is a popular traditional skirt dress among the Zulus. Otherwise known as Isikhakha, It is worn by betrothed or married women in Southern Africa. It is usually a leather skirt, also made of cowhide or goatskin. The lady adorns it with colorful mat-like fabric. Traditionally, fathers of brides give out Isidwabas to their daughters from the cow the bride gets during her coming-of-age ceremony. Subsequently, when a bride is about to wed, she has to wear the skirt on the day of her marriage.

The Isiagu finds its roots among the Igbo people of South-East Nigeria. ‘Isiagu’ literally translates to ‘the head of a leopard/Tiger’. In addition, it will surprise you to see that the cloth has the head of a lion. Well, the lion is taking over the totem reserved for the leopard. The Isiagu is a long, loose-fitting top usually worn over a pair of black trousers or knitted wrappers tied around the waist. Interestingly, the Isiagu is also a status symbol among Igbo men. It is worn on formal occasions such as coronations, traditional meetings, and funerals of Chiefs.

The Toghu is a traditional outfit indigenous to and very popular among the Bamileke people of North-Western Cameroon. Men and women of royalty wore it as a sign of traditional superiority over commoners in the past. It is also a traditional attire suite for investitures, traditional coronations, and other festivals. Toghu is an embroidered, colorful attire made of a black velvety fabric that is heavy to wear.

It is worn initially as a traditional garment by the Yoruba people of Nigeria. Aso oke translates to “top cloth”, denoting that it is a cloth of high status. The fabric is used to make numerous styles for both men and women.

Kanga is a colourful fabric t lighter, worn by women and occasionally by men throughout the African Great Lakes region. It is a piece of printed cotton fabric, often with a border along all four sides, which differs in design from the borders. They are sold in pairs, which can then be cut and hemmed to be used as a set.

Habesha kemis is the traditional African clothing belonging to the Habesha women of Addis Ababa, Ethiopia. It is usually a robe that stretches from the neck to the ankles. The style has evolved in various forms of short- or long-sleeves. It typically comes in grey, beige or white shades and is sewn from cotton fabric.

It’s a plaid shirt similar to the dashiki and worn by men in Ghana. The smock is also called a fugu or a batakari. It is made of hand-loomed strips of Kente fabric three to four inches in width.

The Kuba cloth originated from the Kuba people in what is now the Democratic Republic of Congo. The woven fabric is the ceremonial dress for royalty, thereby expressing the status of wealth, hierarchy, and personal states of transition.

Read also:  7 Ways to Identify Nigerians Anywhere around the World

It is woven as a wraparound skirt from a fiber extracted from the raffia palm. The skirt is secured with a sash and usually worn over a plain red or cream embroidered skirt and is a unisex garment.

It is made by beating sodden strips of the fibrous inner bark of certain trees into sheets, which are then finished into various items. Barkcloth is worn by both sexes among the Baganda in Uganda, as did the Masai of Kenya and Somalis from the Horn of Africa. The trend was rampant in ancient times, but some continue the practice today.

The kaftan is a loose-fitting pullover garment, with an ornate V-shaped or round collar and tailored and embroidered neck and sleeve lines. It is usually worn in North Africa.

Agbada is one of the names for a flowing wide-sleeved robe worn by men in West Africa. The garments are known by various names in different ethnic groups and languages. The Yoruba’s call it agbádá, it’s babban Riga in Hausa, boubou or mbubb in Wolof, k’sa or gandora in Taureg darra’a in Maghrebi Arabic.

The Kanzu style dress is worn for occasions by men of culture to give them an aura of authority and sophistication. They are either white or cream African traditional clothing worn by men in the Africa Great Lakes region. These include Burundians, Congolese, Ethiopians, Kenyans, Malawians, Rwandans, Tanzanians, and Ugandans. Its popularly called Tunic by the English and Thawb by the Arabs. It is trendy in Uganda, where men wear it to weddings and festivals.

This dressing style is native to Yoruba women of Nigeria. The original version of the dress features five pieces. The Iro is a large wrapper tied to fit around the waist. Buba is a loose blouse worn on the upper part of the body. Gele is a head-tie which Nigerian women are globally famous for. The Pele is a short fabric tied to the Iro around the waist. The Iborun is a scarf that runs around the upper left part body from the left shoulder. However, people go with other trends like doing away with the Pele and Iborun, replacing the traditional Aso Oke with other fabrics such as lace, cotton, or chiffon.

The Boubou is a classic, stylish, and functional Senegalese robe worn by men and women all over Africa. It is sewn from one piece of fabric, reaching varying lengths depending on the wearer’s height. The neck is rounded and large for women, while men have theirs long and V-shaped.

Djellabas are long, loose-fitting unisex robes. It is usually full-sleeved and worn in the Maghreb region of North Africa. Traditionally, the main material for designing djellabas is wool. However, these days lightweight cotton djellabas have become trendy. Djellabas often sweep the ground, but sometimes lightweight variants are slimmer and shorter.

Wigs have been worn throughout Africa for millenniums. They are made from synthetic or human hair, whereas the older types were made from indigenous fibers and used for special ceremonies. Ancient customs also included adding oil, ochre, or mud to give textural and sculptural value to the outlook of the wigs.

This is a hat made from Aso oke material. It is a traditional Yoruba hat made of handwoven African fabric.

Gele is a cloth head tie/scarf for women in West and Southern African women’s used to tie the head as part of the African outfit. It is usually worn with a matching Iro and Buba or wrapper gown.

The Iborun is worn like a shawl or shoulder sash, while the Ipele is wrapped around the waist.

The Kufi are of different types. There is a brimless, short, rounded cap and the standing type. Both are worn by a lot of people in West Africa.

The Zulu hat is a head covering worn by the women of the Zulu tribe in Southern Africa. The hat can be made with cloth or beads.

You might have also seen many popular TikTok videos displaying some of the clothes highlighted above; we bet there are some you don’t know their origin. How many of these do you know already? Have you discovered new ones? Do you think we missed some popular clothes?