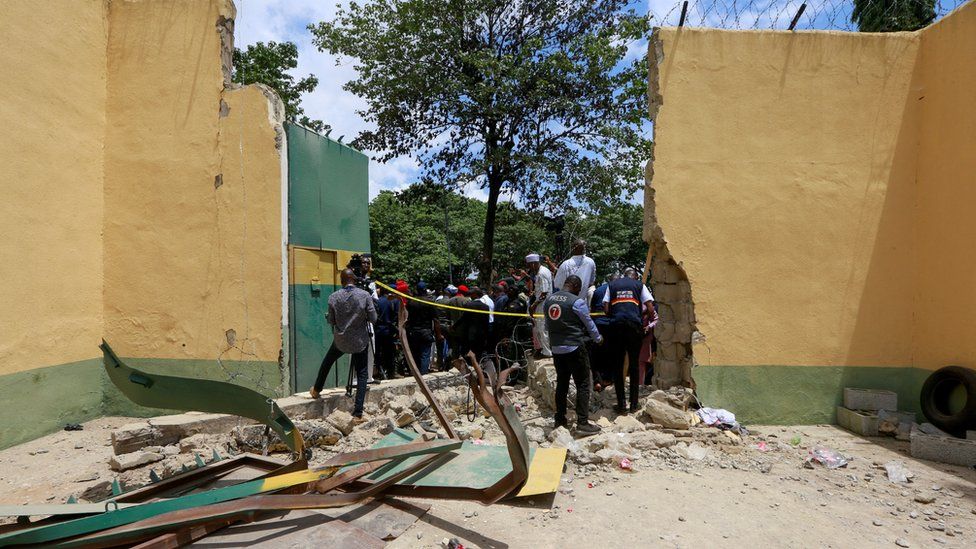 Nigerians living in many northern parts of the country might feel indifferent toward the news of the attack on the correctional centre in the heart of Abuja. The Kuje prison break will not be surprising to them because of the numerous activities of bandits and terrorists in the northern region. To many southerners, the attack is a big national insult.

The terrorists invaded the facility using high explosives and guns; this led to the escape of over 800 of the reported 994 inmates in the centre. The terrorists stormed the centre around 9 pm and operated till 1:30 am on Wednesday. They bombed the fence before gaining entry into the facility and also razed several vehicles belonging to the facility.

For the first time, President Buhari moved from being shocked to being disappointed in the intelligence unit of our security architecture. Speaking to journalists when he visited the Custodial centre, he said,

I am disappointed with the intelligence system. How can terrorists organize, have weapons, attack a security installation and get away with it?”

The President of the senate, Mr Lawan, who also visited the centre on Thursday, described the attack as a sign of security failure and insider conspiracy.

Criminals have developed more grit and gut to the extent of attacking a correctional centre close to the seat of power. The ease at which the group successfully attacked the prison and freed inmates, including several terrorists, calls for concern.

This attack is one of many that exposed the weakness of our military formations. How could terrorists operate for hours at Kuje, which is not too far from the military formation at Gwagwalada? What happened to the major military checkpoints? So many questions are begging for answers.

The Islamic State West Africa Province (ISWAP) claimed responsibility after the attack. They substantiate their claim by sharing a video showing how they freed the inmates. ISWAP is a breakaway faction of the Boko Haram sect. As a militant group and division of the Islamic State (IS), ISWAP is primarily active in the Chad Basin and fights against the states of Nigeria, Cameroon, Chad and Niger. This foreign force is aided internally; their successful attack on a national facility like the Kuje Correctional Centre is a threat to our sovereignty.

Following this attack, there is apprehension in Kuje. Residents cannot have rest of mind knowing there are criminals that are freed all over the town. Moreover, the United Nations advised its employees to avoid public places around the Federal Capital Territory at night.

This attack came around when terrorists attacked the convoy of cars carrying the Advance Team of security guards, protocol and media officers ahead of the President’s trip to Daura for Sallah. Apparently, they aimed at the President.

With this rate of insecurity in the land, where will the President retire after the completion of his tenure? Kaduna, where he lived before becoming the President, is constantly under attacks from bandits and terrorists, like his hometown, Daura.