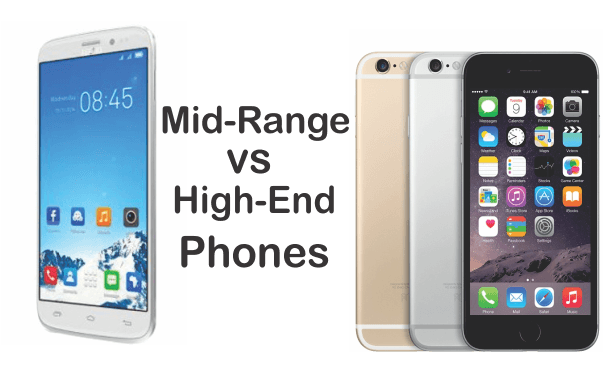 Price and Functionality; Mid-Rangers Vs. High-Enders

One good choice has its effect(s) as does a bad choice and in the world of smartphones, choice is equivalent to a basic amenity of life as there are so many smartphones from a good number of manufacturers to choose from.

Once upon a time, only way one could enjoy the best of mobile technology at the time was to purchase a high-end phone and Nokia’s usually had the best of the lot; remember the ‘communicators‘ and then the N-series phones?

That era was marked with the high-end phones having a suave design (Nokia N90’s still a favourite), support for office, a camera above two megapixels and half a gig in memory along with a slot for memory expansion.

Then, high-end phones had a theme to inspire their creation. The Nokia communicators, Sony Ericsson’s P900 and subsequent models as well as the early Blackberry devices were targeted solely at business folks while the Nokia N-series phones and some of Sony Ericsson’s best Walkman offerings took aim at a younger, hipster target audience.

Motorola also had the early Razr phones, HP had the business-oriented Palm Trio phones and Samsung had those cool flip phones at a time Apple was still thinking up the iPhone.

Nokia even tried fashion-themed devices with the 7260, 7270 and especially the 7280 which had a very peculiar design, a VGA resolution camera, 700mAh Li-ion battery, no FM radio and all of 50MB non-expandable storage and cost at the time what an iPhone 5 costs now.

The point of all the above being, the high-end smartphones had a clear distinction from the mid-range phones which in turn, were clearly distinguishable from the low-end phones which only served the basic of mobile telephony; phone calls, wake-up alarm, and a good game or two … perhaps a torch too.

These days, basically all phones are touchscreen except the Blackberry (which is partly why the Canadian phonemaker survived its worst period of existence) and the emphasis of manufacturers is to make these phones thinner, lighter in weight yet more powerful than standard laptops.

For a while in recent times, the best way of distinguishing the high-enders from the rest were through the processors under the hood, main and selfie cameras as well as, to an extent, screen size and resolution.

Now however, one can choose from an array of mid-range smartphones from contending manufacturers such as Motorola, Blackberry, Lenovo, Huawei, HTC, Sony (not especially), Tecno, Inifinix, Xiaomi, Oppo OnePlus, Sharp along with some offerings from Samsung which are capable of taking good enough pictures and smoothly running basic apps and even one or two stand-out apps; all for about half the price or less of what today’s flagships cost.

Read also:  You Can Be Your Best

The question then is: why should one – who isn’t a tech-head – still crave a smartphone worth $600 or more when one can be duly served by an alternative worth $400 or less? More so when one realizes that a flagship phone’s production cost is at least three times less than its retail cost.

Major manufacturers such as Apple, Samsung, Microsoft and to an extent, Sony, Motorola, HTC, Huawei and Blackberry have the brand name factor going for their flagships and therefore can get away with selling theirs for much more than it cost to produce.

The likes of Lenovo (which holds better clout in the laptop and PC side of business), Tecno, Infinix, Gionee and others on the contrary can’t boast of such clout which would allow them to sell their phones well above the production cost.

But with chipsets which run the phones becoming cheaper yet more powerful, there would be little or no difference in, for instance, a N35,000 Lenovo and an N80,000 Samsung hence, making major economic sense to own the former than the latter.

How high-enders can avoid seeing their vast market share ate up by contenders include making a cheaper spin-off of their flagship (something Sony has been most successful at, with the Z1 Compact and Z3 Compact) or even reducing the retail price of their flagship altogether (Apple and Samsung can very much afford to do so).

There’s also the option of having certain features and specifications that are exclusive to the flagship, such as the S-pen in the Note 4, which would in some way justify its position as the manufacturer’s top device as merely having the most powerful processors and highest resolution main and front cameras is barely enough to set a flagship apart from a mid-ranger these days.