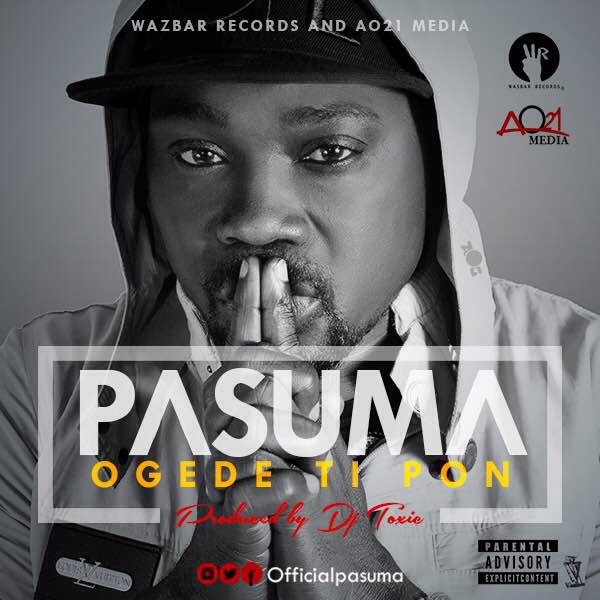 Pasuma and The Nigerian Music Industry

In as much as I’ll like to deny the Fun Fact which states that ‘the kind of music you grow up listening to affects your choice of music later in life’. Read 5 Music Videos That Made My December and you will discover that I know good music. I just have a thing for one of the music acts I grew up listening to; the Fuji maestro Pasuma Wonder. “Pasuma ma l’emi gbọ dagbaa” (borrowing Olamide’s line) I have always liked Alhaji Alabi Pasuma even when the overblown controversy with Osupa Saheed took the Industry by storm. Just like you don’t have to choose the family in which you are born to, you don’t have the choice of music either as a child.

In those days, we were not exposed to all kind of songs like the children of today; who can sing Olamide’s ‘Story for the gods’ without missing a word. All many children and I in my neighbourhood listened to were the songs of Pasuma, Ayinde Barrister, Wasiu Ayinde, Saheed Osupa, Orlando Owoh (of blessed memory), a little reggae and Plantasun Boys my dad played at night. Then came Awilo Logomba with Makosa, Tony Tetula’s “My Car”, Azados, Eedris Abudulkareem with “Mr. Lecturer”, Tuface’s album and the boom of the Nigerian music industry. We had sanity in the music industry then, when lyrics were not as wacky as it is right now. God help me, I might be releasing an album too…lol

Read also:  Save The Dying Soul; How to End Hunger by Kunle Adeleye

This piece is not meant to chronicle Pasuma’s albums and achievements; there is no doubt about the fact that he is a talented and multiple award-winning musician. Though he is a Fuji music star and he has claimed many times that he is an entertainer and yes, he is truly an entertainer. Despite my love for him, I have stopped listening to Fuji for a long time now but when my favourite Fuji artiste does something good, I just have goose bumps…lol

When Uncle Pasuma first featured in Olu Maintain’s Yahooze album in the track titled Aroma, I was like what is a Fuji artiste doing in Olu’s album. The song was not one of my favourites in the album, when Pasuma’s hook/chorus in the song was done, I’d simply skip to the next track.

Many years went by, Pasuma was in Dammy Krane’s Ligali, a slang Pasuma used in his second album many years ago. I guess Dammy Krane listened to Paso while growing up too but I wonder why Bro Krane brought that back when we were told to let ‘by-gone be by-gones’. Pasuma did better than Dammy Krane on that track if you ask me.

I was browsing through tooxclusive.com about 5months ago when I stumbled on Ife by Pasuma ft. Tiwa Savage. Oh my! I love the song like I don’t know why. The ever-soothing voice of Tiwa on that song made it more dope. We all know Pasuma has got a wonderful voice too, their combination on the chorus was amazing. This song received massive airplay and a video was later released. Watch the video below if you have not seen it.

Read also:  A Look Back At 2014
Advertisements

Pasuma is known for brewing several street slangs and Oga nla which means big boss seem to be the latest. Olamide in his latest album Street OT has a song titled ‘Oga nla’ which features the Oga nla himself, Pasuma and Lil Kesh. Pasuma’s chorus on that song is just to dope for my liking. Kilode!

And now ‘Ogede ti pon’! When I saw this video on HipTv, I was like (goose bumps again). This is the video that made me write this piece. Paso was rapping on this video, Pasuma Wonder now a Yoruba Rapper? DJ Toxiq produced the song and the video was directed by the talented Unlimited L.A. The lyrical content is better than most of the songs released these days. Watch this video below and share your thoughts in the comment box. Enjoy the video!

Judging from Pasuma’s recent escapades, is this an attempt to leap into the Nigerian Hip-hop scene?

Update: He has released a new hip-hop album titled “My World”.

I’ll like you to share this article and let’s see if we can get him to answer us? I love Pasuma; no homo please.

5 Music Videos That Made My December