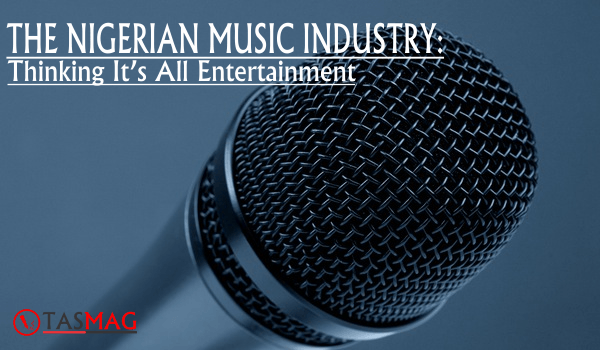 I’m twenty-some years old and grew up in a relatively social family. I mean, my dad once called me from my room at about 10pm while I was studying for a WAEC examination (Agric. Practical) I had the morning after to come and watch a wrestling program which runs from 10-12pm. To add cherry on top, he wouldn’t let me get back to studying after the program ended; he insisted I go to sleep. Woke up the next morning worried I might fail (I didn’t though, in case you are wondering).

My point is that, I’ve been glued to the idiot box for as long as I can remember, and I know for a fact that if you watch what you are watching, you learn more on TV than you’ll ever learn in school. Growing up like this, it kind of hard not to be into music.

I started with the basics just like anyone else, the likes of Michael Jackson, Celine Dion, Westlife, Lagbaja, Awilo, Fuji Music and anything else the local TV or radio would play. The switch-over to a core music fan occurred right around the time I heard the Akon “Trouble” album for the first time. The album made me start listening to lyrics, and then I found my way to Hip Hop.

Now, to an average Nigerian, Hip Hop is probably just a genre of music and most can’t even tell a real Hip Hop song from one that is just pretending to be. On the other hand, there are core fans out there who see it for exactly what it is; a “culture”. I know what you are thinking, I’m bugging right? Sometimes I think so too. I mean, what else do you call something with its own language, dressing, customs and has people living their lives in adherence to these elements. For example, artists like Rakim, Nas, Jay-Z, 2pac, Biggie, Eminem to name a few does/did so much for this culture that people quote them in elite conversations, corporate bodies invite the for interviews the has nothing to do with money (Google interviewed Nas for over an hour for the 20th year anniversary of his debut album), just pure respect for the intellect they portrayed through their lyrics and music.

The likes of this aforementioned idols of the culture did so much, that it gave birth to the new generation of genius artists like J. Cole, Kendrick Lamar, Lupe Fiasco, Wale and a few others that will turn you to an astronaut (because you feel like you are on another planet) on every verse with the way they paint vivid pictures of what they talk about in their music. To top it all, these guys are young and came from poor backgrounds (so it’s not like they are not looking to make money too), but this doesn’t stop them from talking about the realest things in life that anyone who cares to listen can relate to. As good as these artists are, it’s not their skills only that is keeping them at the top of the game, but the fact that the fans choose to listen to them as opposed to “wack” artists.

Sadly, the motivation in Nigerian artists is completely different and this has a lot to do with the quality of materials that are being put out. Think about it, the most popular artists in Nigeria are either mediocre or bother line “wack” (I’m sure some names are crossing your mind right now), those that hide behind banging and sweet beats due to their weak and poor lyrics; and keep making the producers a star. As sad as that is, the saddest part is that’s not the saddest part, because it’s even more sad to realize that the music fans in Nigeria tend to listen to more of the “wack” artists than the few dope ones, thereby encouraging poor music and subjecting the good ones to obscurity.

At this age and time of music in Nigeria, we most certainly have legendary artists (dead or alive) that we can listen to and call old-school (artists like Fela, 2face, and very few more). Now imagine Nigeria in the next 20 years, when we’ll be in our 60s; who do we listen to then? Call old-school, reminisce and be proud to tell our kids that

“I loved this song when I was a youth”

Nigeria being a developing country that is barely getting anything right, with all the sectors (sport, power, politics, economy) very poor . I think entertainment is still the only sector we can be proud of, and for that, may God bless anyone who has had anything thing positive to contribute to its growth. All I’m saying is, let’s not allow just anyone with an access to a microphone and production software to ruin something so precious (Music!!!).

To sign off, let me leave you with the words of KXNG Crooked, he said

Hov being Jay-Z and Cole being J. Cole, these are two people who started at very different generations and parts of life; one was from the streets and the other from college. I guess what KXNG Crooked is trying to say is that no what where you are from, you have to be “dope” at whatever it is you do, if not then please don’t! Some things (like music) are just too important to the society to have people getting into it for the wrong reasons and ending up ruining it for everybody else.

I know the ship might have sailed on all my blabbing actually making any difference in the current state of the Nigerian music industry as it is. Plus they probably won’t get to read this, but then this is not directed at them. This is for you youngsters and upcoming artists, already in the game in their own little way, Please! Please!! Please!!! Develop your craft in such a way that you are respected so much that the anniversary of your album is celebrated (It doesn’t get any better than that).

I can only hope y’all know what I’m talking about!

Pasuma and The Nigerian Music Industry